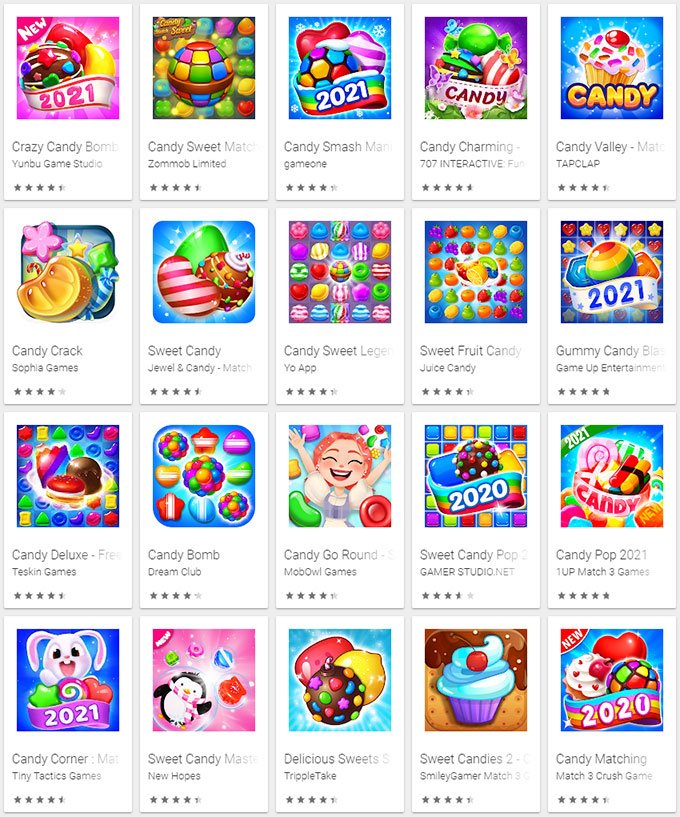 A game has to be noticeable to have a shot at success. Players have to care and be delighted by some aspect of it. Otherwise, the game gets drowned in the overpopulated app stores.

Getting discovered in this sea of noise is a problem that needs solving early in development. If the agenda is doing business that is. Noticeability needs to be considered the very moment a game concept starts forming.

I expect to publish my match-3 game—Solomeow’s Magic Blast—to over-populated mobile app stores. I still have no real idea how to solve many marketing problems. But, at least I can focus on the design side of things, even if it’s just theory crafting until tested.

Part of the solution can be not to develop games in oversaturated genres. Try developing a PC platformer, and you soon learn that the competition is fierce. There are too many quality projects and an excess of generic clones. Creating a stand-out, novel experience is difficult. Worse still is that the players are over-satiated with the genre due to all the choices.

Yet here I am, developing a game for an oversaturated genre. Match-3 is among the most popular gaming genres on mobile. It regularly spawns numerous generic clones and high-profile titles. Not to mention the staggering amount of games and apps on mobile app stores.

The oversaturation of casual puzzle games

A search for Candy in the Google Play store returns hundreds of results that look like this:

Most of these games are clones of Candy Crush Saga. They have the same gameplay and utilize the same theme, but are worse than the original. They don’t innovate or improve on the formula, yet many have over 100,000 installs. Several have over a million. I have no clue how lucrative that is for their creators, but there they are, flooding the stores.

I imagine clones are not much of a competition, but the noise they create is an issue. It makes discoverability hard. A more significant problem is the oversaturation of choice in the freemium puzzle genre.

The big hitters have so much content they can keep players engaged for years. These are quality, polished, high-production products; games like Candy Crush Saga, Toon Blast, Gardenscapes, or Angry Birds Blast. These games see frequent updates with fresh batches of content. All the while, their developers keep on creating brand new games. Utilizing a similar formula with a marketing edge of established brands and reach.

Match-3 is so prevalent that all your favorite pop-culture entertainment has its match-3 game counterpart. From Lord of the Rings and Harry Potter to anything Disney, Pixar, even Simon’s Cat. Many are quickly churned-out skinner boxes designed to capitalize on the simplicity and addictiveness of the casual puzzle genre.

The casual addictiveness of the genre was one of the reasons I started Solomeow’s Magic Blast. In the past, I used to get sucked into various match-3 games. So, developing something similar promised a fun and engaging development process.

And it is! After years of repeatedly developing and playtesting the same thing, it’s still as engaging and hypnotizing.

Perhaps entering an over-saturated market wasn’t the brightest choice. But the fact that match-3 games are being played seems to promise there’s an audience waiting for the Next Thing™. Their hypnotic casualty might make them fare better than platformers? One can convince themself of whatever they want to believe hope.

For Solomeow’s Magic Blast to stand out, I decided on four core tenets:

While figuring out what’s fun, Solomeow’s Magic Blast went through several design iterations. The most notable being its spellcasting system.

The most fun elements of match-3 games are powerup objects. These create mayhem and destruction on the board and make the player feel powerful. Creating and using them is flashy and very satisfying. When utilized well, the player can expect explosions galore. Fun to look at and often lead to a desirable outcome. Without them, the play would drag, and levels would be dull to play.

Instead of creating and combining powerups on the board, in Solomeow’s—the player forms and collects star clusters. Stars serve as currency (mana) to cast one of 35 different spells.

Choosing which five spells to carry in levels changes the playstyle while allowing ample exploration. And with so many spells, there are many special effects and explosions to have fun with. All wrapped in a simple, accessible system and a sense of strategy.

Magical theme and a cute mascot

Candy was out of the question from the get-go. 🙃

It’s not that magic and cats aren’t overused themes, either. From Bubble Witch Saga to Gunspell, magic is a popular trope in match-3. However, it seems to take on one of two forms exclusively. Either it is a bubbly, colorful pop fantasy or a gritty, serious hero fantasy.

With Solomeow’s Magic Blast, I wanted to mix the cute and bubbly with a subtly dark, occult feel. I drew most lore inspiration from runic and elemental magic while trying to keep the visuals on the simple, Nintendo-inspired side. Nintendo games often strike a good balance of cute without being saccharine.

As for Solomeow—the cat mascot—it was a happy combination of being easy to draw and a name that is a play on Solomon—the magus.

To me, a great video game is more than just play. A well-developed story and a branching narrative make any game better! Why are you laughing? What do you mean it doesn’t work with most games? 🤨

Where most gamers enjoy pew-pew, I love a good words-spew. Naturally, I want to see narrative exploration and branching dialogs everywhere. Writing a poorly constructed story with cringe characters is a small price to pay if there’s a chance to glimpse the glory of immersive storytelling.

Match-3 games either have superficial stories or none at all. When they have stories, they aim to connect the player with the busy work. Rather than attempting to provide meaning and connection.

With Solomeow’s Magic Blast, I want to explore a different direction, so I’m developing a thin layer of 1-on-1 dialog between the player and the game’s titular character. The aim: focus on fostering a meaningful connection rather than creating an avatar of busywork and microtransactions.

Yet, I have no idea if that will work out or not. The goal is immersion in the vein of games like A Short Hike. Some sparse dialog could infuse the game with meaning—and attempt to tick emotional checkboxes genuinely.

Even if the story is still unclear, the ending is a certainty. Everything ends. Entertainment is much more memorable and impactful when it reaches a satisfying finale! Rather than deflating, leaving the audience with a sense of annoyed resignation…

The surprise and delights should happen through story progression and level design—the generosity through abilities freely available to all players.

No player loves the pay-to-win monetization model often abused if freemium games. It also seems that many such games hide bland, time-wasting experiences beneath a veneer of charm.

Solomeow’s Magic Blast is also a freemium game. It will have a lot of optional In-App Purchases (IAPs). Naturally, I want them to sell. But, I don’t believe making sales has to be done through cheap, manipulative tactics like forced scarcity, an infinite need for consumables, and coercion.

As a consumer, I’m okay with some allure. Like, when a game keeps nudging me towards a tempting offer to entice me into spending. Fine, take my money. But let me have my fun. Don’t take the investment away from me an hour later, then nag me to repurchase it to regain a modicum of joy.

Most IAPs in Solomeow’s will be of the permanent variety. Things like more powerful spells and abilities that make the game less challenging but more fun to mess around with.

All this is fine and well in theory, yet it could easily fall apart on me. Once published, things could have the opposite effect of the desired. So I’m curious to see how it pans out.

This website uses cookies to remember your preferences on repeat visits. Also to analyze your behavior as a visitor, through use of Google Analytics Cliking "Reject all" will disallow all cookies except for those used to manage your consent. For more info on cookies, please check the Cookie Policy
Your data will never be sold to third-parties, to find out more about how this site handles your data, check the Privacy Policy
Accept AllReject AllCookie Settings

Out of these, the cookies that are categorized as necessary are stored on your browser automatically, as they are essential for the working of basic functionalities of the website.

We also use third-party cookies that help us analyze and understand how you use this website. These cookies will be stored in your browser only with your consent. You also have the option to opt-out of these cookies. But opting out of some of these cookies may affect your browsing experience.
Necessary Always Enabled
Necessary cookies are absolutely essential for the website to function properly. These cookies ensure basic functionalities and security features of the website, anonymously.
Functional
Functional cookies help to perform certain functionalities like sharing the content of the website on social media platforms, collect feedbacks, and other third-party features.
Performance
Performance cookies are used to understand and analyze the key performance indexes of the website which helps in delivering a better user experience for the visitors.
Analytics
Analytical cookies are used to understand how visitors interact with the website. These cookies help provide information on metrics the number of visitors, bounce rate, traffic source, etc.
Others
Other uncategorized cookies are those that are being analyzed and have not been classified into a category as yet.
SAVE & ACCEPT
Powered by